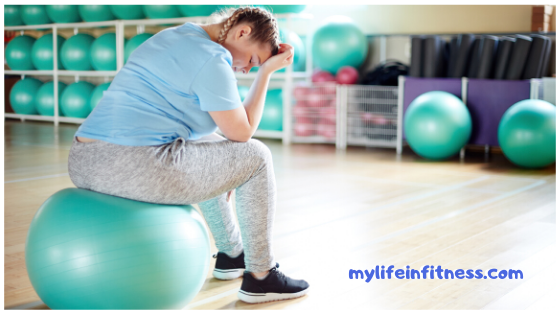 As I entered into my career as a group fitness instructor, I was blissfully unaware of all of the things that might go wrong while teaching, especially while subbing another instructor’s class. That’s why I feel compelled to share with you one of my most embarrassing moments in group fitness: my first walkout.

I was asked by a colleague of mine to sub a group strength and cardio class that met right before my regular dance fitness session. Since I was already teaching indoor bootcamps at Method3 Fitness (then Fast Action Training), I knew it would be a piece of cake!

I planned a workout I just knew would be challenging and fun! Then I showed up ready to deliver.

Most of the class was super friendly and grateful to be met with something different (as opposed to a class cancellation). But there was one woman whom I noticed was struggling with workload. She moved slowly from one exercise to the next and I can only describe her form during the moves as a personal trainer’s nightmare.

Just know that I’m not trying to belittle her. I was truly worried that she would injure herself! So I happily approached her for form corrections and suggested modifications. She was not impressed, but rather, she ignored me and continued to do her thing.

As we moved into the next block of exercises, I gave the class a break while I demonstrated the next set of moves. As the other students watched intently, I heard a gasp from far right side of the room “UGH!”

EVERYONE turned to look. The woman shook her head and as I continued to demonstrate, she began to pick up her equipment and put it away… one piece at a time. First her mat. Then her weights. Then the bench.

Important side note: She had chosen a spot on the right side of the room, in the front. The equipment was on the left, in the back. So she walked past the group about 6 times 😐 😅 😮

Truth be told, I was shocked at her blatant disruption of class. At the same time, as an older woman who had probably been attending the class regularly for years, I could see that it was just her frustration boiling over. So…

My guidance compass: Be kind. Be confident. Be professional.

My first walkout taught me quite a bit about having a career in group fitness:

You never know what you’re going to get when you get hired for a new class or sub someone else’s. There’s always an adjustment. As long as you know that you brought your best stuff and worked hard to keep the class engaged, you’ve done your due diligence.

Did you find this piece funny? Helpful? Scary? Let me know in the comments below! And if you’re an instructor who has had an experience like this, share that too! We can commiserate together 😉

One thought on “Embarrassing Moments in Group Fitness: My First Walkout”

This site uses Akismet to reduce spam. Learn how your comment data is processed.